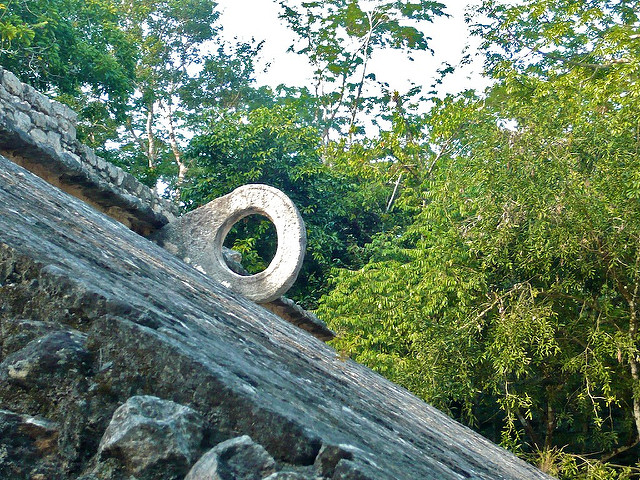 Everything I’ve read online and in guidebooks about the Mexico’s Coba Ruins has labeled them as “remote and/or difficult to access.” Maybe I’m recalling it incorrectly and it wasn’t that dramatic, but either way that’s not the case.

The Coba Ruins are located adjacent to the village of Coba in the central Yucatan Peninsula. Unlike other ruins in the peninsula Coba doesn’t have one large or significant element to distinguish itself, such as El Castillo pyramid at Chichen Itza.

One reason they are less visited is that most daytrippers are steered towards Tulum, the group of ruins perched above the coast with their magnificent views of the Caribbean Sea. Between Chichen Itza and Tulum, Coba finds itself in third place, however it’s well worth the visit.

The Alamo car I rented wasn’t the highest of caliber – so when I spotted the blue and yellow logo across from the Don Huacho I thought “Great – I can switch out my car.” – and be quickly on our way. No such luck as they were on siesta until 4pm. We pushed on and despite the car’s rough starts we made it. Nothing like a little fear of night approaching and being stuck in the jungle.

The wide highway from Tulum to Coba is a breeze to drive, the road is in as good a condition if not better than Autopista 180. Its about 30 miles from Tulum, (on the coast,) inland to Coba. Just before the village is a large traffic circle with a road branching northwest to Valladolid.

The small town of Coba is located between two large lakes. Similar to other archaeological sites around the region you pay a few dollars to access a large parking lot, and around the perimeter of the lot are locals selling souvenirs and hand made goods.

Coba is unique in that it truly is IN the jungle. The site is spread out over a few miles with paths under vast canopies of trees, and groups of ruins in various stages of completed restoration. The initial site consists of the church, (the most prominent structure,) and the “ball court,” with its smooth sides and preserved carvings. Other groups are down a dirt trail of about two miles. No cars are allowed but you can walk or rent a bike from the kiosk at the trailhead. (Cost is a few dollars.) At the very end is the Nohoc-Mul group, with El Castillo (the Castle,) in the center.

When we visited at 3pm the crowds were light and the sun was just starting to set, making for beautiful shadows and lines on the stones. I was grateful for the solitude as we wandered around seeing the large pyramids, ball courts, and large stone markers. After seeing the initial group we rented a bike and rode about two miles to the remote site.

The remote sites are literally walled off by the immense jungle trees. We wandered a few hundred feet to the edge, and as we returned I was a bit disoriented when looking for the path, but eventually ran into it from another angle. Here even the large monuments can be obscured from a short distance.

This map shows the locations of the Coba sites. It’s well worth a visit, especially if combined with Tulum.