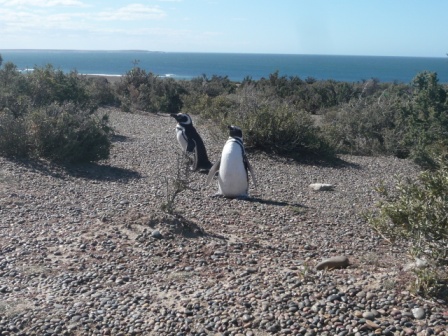 Punta Tombo is located about 85 miles southeast of Trelew, the capitol of the province of Chubut. We drove in our rented car from Puerto Madryn, (a beachside town known for whale watching,) down Ruta 3.  20 miles and 45 minutes later down a bumpy dirt road the shimmering Atlantic  came into view.

We got a late start and arrived about 2pm. This was good, as most of the small tour buses were departing back to Trelew and Puerto Madryn leaving the already huge park almost unpopulated by humans.  We paid 35 pesos, and a few yards away spotted the first penguin laying on his belly by the walkway. A few more were lounging doing nothing, (rather than constantly doing cute things one expects from a penguin.

We ambled down the two mile trail, and after we arrived at one of the “penguin crossings,” the scene vividly changed. A wooden walkway leads over this wide natural path, located between the scrub, which leads to the ocean.  It’s used as a route when one penguin leaves the other in the nest in search of food. We saw hundreds of them briskly walking back and forth to the ocean, and looking the other direction inland hundreds of nests pockmarked the scrubby gray land.

I couldn’t help wondering if the solitary penguins were looking for a mate, or returning food hunting in the ocean and searching for their nest. In some cases on penguin will swim hundreds and hundreds of miles into the Atlantic stocking up on food, and days later waddle back up while sounding their unique call to their mate. However I felt concerned for the individual penguins – seeing that one couple had laid an egg already I hoped the majority would pair up in an ideal perfect world way.

We spent about three hours here just wandering the paths.  The paths are clearly marked towards the front, but towards the ocean they become less defined.  The penguins regularly cross the path and make their burrows in close proximity.  In some areas there were so many penguins ON the trails we were careful not to trip over them.   It’s required you maintain a few yards distance and of course do not attempt to touch them.  One actually started chasing me, possibly because my green jacket looked like a plant.  (Not sure if penguins see colors.)

Without doubt one of the most beautiful and amazing things I have ever seen.  Something I’ll never forget, and I felt privileged to see such a part of nature so close.