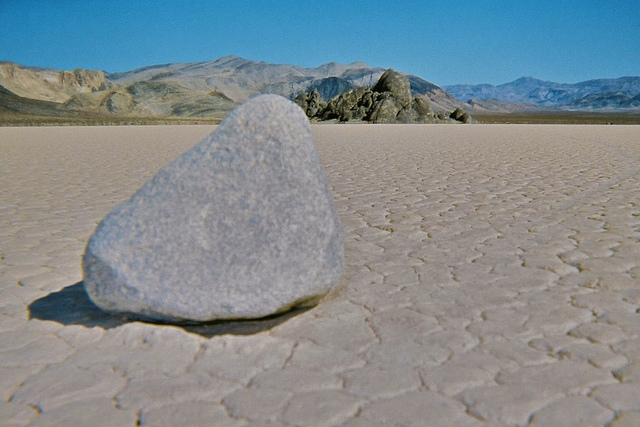 I had read about the “Racetrack Playa”, a huge lake bed with a large rock formation in the center. Discovery Channel and Learning Channel, (back when TLC was cool), occasionally feature stories about the lake bed’s “moving rocks” which moved across the lake bed leaving trails. Experts weren’t sure exactly how it happened, other than speculating wind pushed them when there was a layer of moisture on the lake bed. Of course other quasi credible folks assumed it was aliens doing some mischief, but we thought it would be a cool place to check out.

Racetrack playa is only accessible via a 40 mile dirt off next to the Ubehebe Crater, (follow the signs). After an hour of driving on a washboard dirt road we came to then end where we saw the huge dry lakebed and the enormous rock formations known as the “grandstands”